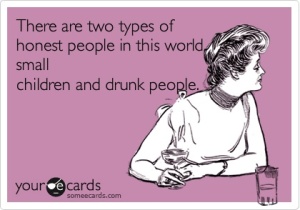 In addition to nudity, loose lips, and lack of motor skills, the like tendencies of drunkards and kiddos extend to both 1) what will snap them into sobriety/good behavior, and 2) what will calm them in a storm (whether the storm be separation anxiety or too many shots).

The latter is, in one word, comfort. I understand the confusion, and feeling of anxiety that can rear its ugly head when a child misses his/her folks late at night. I’ve seen it before, on the faces of my chums who have had a few too many and want to go home when, for whatever reason(usually a ride home), that is not possible. With the kiddos I hold them, rock them, sing to them, speak softly to them to lift their spirits. Similarly I pull my homesick homies out of their funk by pulling them out on the dance floor for one last song(hoping to make the time fly by), getting them water, lending my shoulder for them to lean(and hopefully not vomit) on, telling them we’ll be home soon. On a particularly party-filled bachelorette party sojourn to 6th Street, I got the gals to hydrate by bringing them trays of “shots” which were nothing more than club soda and grenadine. “These are soooo good! I’m taking three!” was the general consensus as they consumed the slyly nonalcoholic beverages- not unlike when I procure a glass of water or warm milk for a kiddo having a wave of late night loneliness. 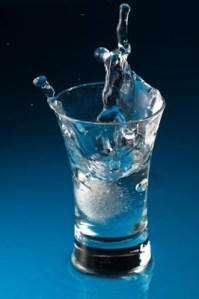 For an example of the former, I refer to a personal anecdote plucked from the plethora of plastered memories from my time at Texas State. As the square and its bars closed at 12am during my time as a student/barfly (Now they’re open until 2am, 7 nights a week. Cool.), my cronies and I often found ourselves bound to 6th street for nights that extended well past midnight. On one such evening, we had frequented the usual dancey, sugary cocktail bars, shaking it and shooting it until closing time. After departing from the bars, I started walking down 6th, enamored by the lights, distracted by the people, blissfully enjoying a night of being young, buzzed, and carefree. By chance I looked through a picture window into a tattoo parlor, just in time to see my own pal, Crazy A, climbing into the tattooist’s chair. I did a double-take, at first not trusting my double vision, but OH MY GOD, it was her! I immediately ran into the tattoo parlor.
“Crazy A, what the heck are you doing in here???”
“I’m getting a tattoo,” she slurred.
(The details of the content and location of the tattoo will remain between, Crazy A and I, but trust me, as a person not in the least bit anti-tattoo, this one would have been a colossal mistake!)
“Are you out of your mind?—sir don’t you think she’s a little drunk for this?”
“I’M NOT DRUNK, I’m getting a tattoo,” Crazy A insisted as she signed the waiver, and by extension her dignity away.
Somehow through the haze of my own consumption that evening, a light bulb went off in my head. I had a plan.
“Ok, if you’re not drunk, I’ll let you get the tatt, but you have to prove that you’re not.”
“Cool.”
“If you’re not drunk tell me your home number,” I said, plucking up her phone under the pretense of checking the correctness of her response.”
“Easy,” Crazy A smiled, “***-***-****!”
“Correct! Sweet, now I’m calling your mother to tell her you’re getting a tattoo,” I deadpanned as I walked out of the tattoo parlor.

Upon hearing the words, “Your mother,” anyone snaps out of whatever shenanigans they’d otherwise engage in, and Crazy A was no exception. No sooner had I uttered the maternal warning and turned on my heel, she was out of that chair, hollering, “Toodles!” to the nonplussed tattoo artist and right beside me, as I handed her phone back. I’d been bluffing, hadn’t pressed “CALL”, and we giggled, walking arm in arm to meet the rest of our stumbling companions.

In the same way I invoke the name of mother/father when the kiddos are behaving like scoundrels (sans alcohol). It’s a last resort, (as a Supernanny I much prefer to rely on my skills and rapport with the kiddos to keep them in line, rather than relying on the disciplinary fear of a phantom parental unit), but once in a while, I’m left with very few options, and would rather suggest that, “Mommy/Daddy will not be thrilled when I tell her/him how you {insert offensive behavior here},” than put up with whatever said offensive behavior is underway.

And so at times, this Supernanny must treat her charges much like she has her booze-fueled buddies in the past: cleaning up their messes, comforting them in confusion, and reminding them that their mother is just a phone call away. 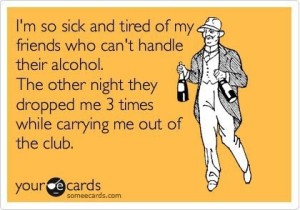