← Call out the Instigator
It’s the Little Things:) →

As a Supernanny, I try my best to always be engaging to the kiddos. I play with them, talk to them, always trying to keep them active and excited. However, I have learned from my charges, mostly those that are only children, that sometimes kiddos, like adults, need their personal space.

While nannying Boss Lady, we spend much of the time with activities that are mutual. She’ll whip me up something to eat at her kitchen center, we’ll chase the ball around the house, walking and talking, etc. But I found that Boss Lady prefers parallel play a certain percentage of the time. I’ll get out the blocks, puzzles, markers, and she will direct me to one activity then will sit next to me and do her own thing. The first time she did this it cracked me up. She guided me as a teacher would a student. (Now, the pupil has become the teacher!) And so I would draw her a picture while she worked on a puzzle, I would build a castle while she colored in my drawing; both occupied and enjoying each other’s company, whilst doing separate activities. (It reminded me of Woody Allen’s ideal of romance, that distance that is important to one’s own development, that separate togetherness of he and Mia Farrow having separate apartments across Central Park from which they would wave to each other.) Though Boss Lady and I may not be playing together, per say, I’m there. Sometimes just the presence of a playmate is enough.

I experienced this again recently with Sassafras. Sassy has become a walking, signing, sometimes talking little bundle of personality, and that she started out with so much moxie in the first place, I see big things ahead for this gal in the way of humor, intelligence, and pluck! Never more perfectly illustrated than by her recent assertion of needing some space while I was nannying her for the afternoon. I put her in her play area, handed her some toys, and was stepping into it myself when she squawked at me with disapproval. I put my leg back out of the play pen and she began playing with her toys happily. I popped on some Beatles Pandora, and then swung my leg over again, and again she squawked, admonishing me. After a few more hokey pokey moves on my part just to be sure, I realized she wanted me to sit next to her, outside the play area. She wanted to see me, and for me to watch her play, she just didn’t want to play with me. And so we played separate but content. 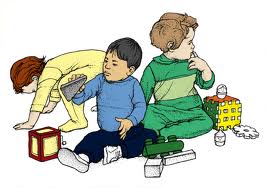 Taking a cue from the gals, I try to remind the other kiddos, particularly the ones with siblings, that at times it’s best to give each other some space, and play separately. I don’t know how many times I have stopped an imminent sibling struggle by simply separating the kiddos, having one play in another room, or play with another game/toy. A valuable bit of nannying wisdom: when it comes to kiddos, try to create a separate peace.

3 Comments on “A Separate Peace”