Of course I want the kiddos’ time with me to be carefree and fanciful, but I also try to teach them little lessons along the way. Education starts in the home, so on my designated days of the week, it begins with me! 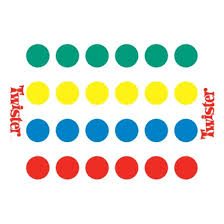 I’ve found that playing many games that are pure fun, can be a way to teach the kiddos too. While playing Twister with Princess and Captain Awesome, I was pleasantly surprised to find that we were not only contorting and cavorting but casually learning too! For Captain Awesome, I would have him tell me which color the arrow landed on, which honed his hue recognition, and Princess and I worked on her Right/Left knowledge with every spin of the board! The only thing better than laughing, is laughing while learning.

While having a date night with Handsome and Blue Eyes, they introduced me to a game called Spot It, which I had never played before but is now my new favorite. Spot It helps sharpen your visual recognition skills in a sort of matching game. You have a few cards that have several objects of varying colors and shapes on them and from the draw pile in the middle is flipped over a card. All players check to see if any of the objects on the drawn card match an object on his/her card, and first to recognize and verbalize a match takes the card into his/her possession. At the end the player with most cards wins! I have to say after throwing my fair share(pun intended) of games, Handsome and Blue Eyes beat me on this one fair and square!

Doc, Rebel, and I often play Raccoon Rumpus, a game where you roll dice which land on an article/s of clothing, and a color. The player must pick a card with the corresponding wardrobe on it and place it on their raccoon. Should the player roll “Underwear”, he/she must put all of his/her cards back. The savvy creators of this game knew their target audience. The best way to soften the blow of a kiddo starting back at zero on a game is to incorporate the word “underwear” when it happens. The kiddos laugh every time, good-naturedly placing their cards back in the mix. The player who reaches 5 cards(aka outfits) first wins! This game is a great way to increase color recognition, as well as a playing field leveled by luck. If the dice rolls “Underwear”, no matter how many lucky rolls you’ve had before, your raccoon has to strip down to his skivvies! I’ve found that when playing with the boys, one of us wins at least once in five games. It’s important for building confidence that they win sometimes, but the reality of losing is equally important! Color recognition is key for Rebel in this game, and both he and Doc are getting quite good at counting their own cards out loud. And imagine the joke possibilities:

Miss Cheryl:(on a “Blue Bottom” roll) “This raccoon must be cold! His bottom is blue!”

Miss Cheryl: (after rolling a “Red Bottom”)”I wonder if that raccoon sat on some poison ivy!”

No matter the activity, there can always be a lesson to learn, and if I can play something fun with the kiddos, and also make it educational? I’m game!