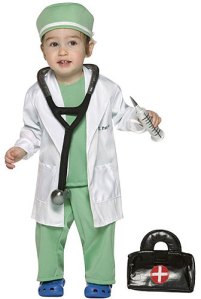 As a Supernanny, who has nursed many a sick child, I rarely get the opportunity to play patient. However, when the chance for this role arises, I am all too eager to participate (if only to sit or lie down for a minute). With my older sister, Laurel being an excellent pediatrician, I have gained much experience taking on the less active part of patient. It is absolutely hilarious watching the kiddos take on the role of doctor, hilarious and adorable.

Back when Doc was 3 years old he gave me a checkup with his toy doctor bag, complete with stethoscope, blood pressure gauge, reflex hammer, measuring tape(think he may have mixed kits with that one), and syringe. After repeating all methods of procedure approximately seven times, he delivered my diagnosis stating that, “You have good blood pressure. And good reflexes. And you are a 10.” There you have it, good vitals and measurements a perfect ten! With my health in order, I helped playing doctor become more of a well-rounded game for Doc. We brought down stuffed animals from upstairs and made one chair the waiting room, we even put magazines and books in the chair so the patients would have plenty to read while they waited. In front of the fireplace, we had the examination room set up, where Doc was chief resident cutie in charge! And on the sofa we had a treatment area set up, where patients who had suffered through their shots could put their feet up and relax until their folks could pick them up (obviously Doc’s chosen field at this point was pediatrics). So proceeded an afternoon of Dr. Doc bringing joy and care to his ill playthings…and his Miss Cheryl. ☺ 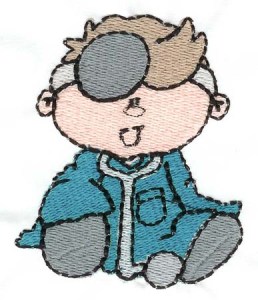 Another brief but very memorable trip to the kiddoctor’s office happened with Captain Awesome. Armed with his toy stethoscope he checked my heartbeat…then my headbeat…then my earbeat…then my cheekbeat…then my kneebeat. HAHA! It was all I could do not to laugh out loud, (It’s important for kiddos –especially Captain Awesome, who is rarely in serious mode-to feel that I sincerely play at make believe, because I do. Sometimes it’s just so funny!) I giggled on the inside, shoulders shaking a bit. Next patient: his older sister, Princess, who has a flair for the dramatic, and expertly feigned a fever.

After a trip to Dr. Doc, and Dr. McAwesome, I felt healthier than I had in years, and for a hard-working Supernanny, darling kiddos with good hearts are just what the doctor ordered. ☺

2 Comments on “The Good Doctors”