Now, today’s series spotlight choice, Jessa Johansson, may come as a surprise to any of y’all who are familiar with this character on HBO’s Girls. Jessa (played by the luminous Jemima Kirke) is unreliable, curses, loses the kiddos at one point, and ends up having an inappropriate flirtation with the father of her charges (I won’t even get into the debauchery of her off-duty shenanigans, though if you’re a fan of the show, you already well know!). So, no, she is not an obvious candidate for Supernanny Icon status, (In all honesty, she’s not even someone I would refer as a nannying contact.) but hear me out, as there are traits of hers that I find to be: at the most admirable, and at the least amusing.

First off, Jessa always looks gorgeous. She is a très chic dresser, always toting the tots around town wearing floral rompers, flowing maxi dresses; her long hair is always perfectly tousled, or impeccably pinned up, her makeup worthy of a Chanel ad. I find her fashion forwardness an impracticality in my day-to-day life nannying in Austin, but nonetheless an irrationality I pine to pursue! My nannying wardrobe consists of T-shirts, shorts, flip-flops in the summertime, and T-shirts, leggings/jeans, sneakers/boots in the winter. I dress for the kiddos and my activities with them, not wanting to worry about staining or ripping any article of clothing, knowing that damage to my clothes is not only possible, but inevitable. There’s nothing I wear to work I couldn’t stand to have ruined. I would love to sport a cute fedora, and do on my off-duty time, but know that if we’re at the park and the wind blows my hat off my head at the same time a kiddo loses his/her grip on the monkey bars, my instinct will be to catch the kiddo, while the fedora blows across the gravel before being trampled by other park players. (Can you tell this has happened before? My one crack at breaking out of my plainclothes prison.) At some point I may incorporate more of my off-duty wardrobe into my working one, Jessa certainly motivates me to someday de-frumpify my dress, but for now I like the distinction between my “nanny clothes” and my “me clothes”. After a long day of dressing with spills, chasing kiddos, and absorbing spit-up in mind, I like slipping into a dress or jeans that I wear just for me. 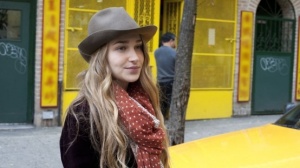 My Jessa jealousy germinates even more intensely around her ability to say anything to, and in front, of the kiddos she nannies. When she shows up late to pick up her two little female charges from school, a tad tardy, one of them calls her out on being late, to which she accuses the child of being, “such a little nazi!” Her political incorrectness, combined with her constant cursing, illustrate her complete lack of filter. As my family and pals know, in my non-nannying life I have no filter, saying whatever is in my mind, but once in nanny mode, a dam goes up, separating the swears and unsuitable observations from making their way into the flow of my exchanges with the kiddos. (As a Supernanny I pride myself on not having an inappropriate slip of the swearing tongue in front of my charges, but I must admit, when Jessa does it: hilarious!) In an even more outrageous instance, after losing kiddos in Central Park, the first thing she does upon finding them is spout profanity their way.

Now it may seem as if I’m cataloging faults in Jessa’s nannying, and that she’s really an anti-Supernanny, whose freedom from nanny rules is a walk on the wild side I’d love to take, but truly there are actually true Supernanny elements to the way she operates. In a darling exchange between Jessa and one of her charges, she eagerly asks the child to read the “novel” she’s working on. Jessa is truly interested, asking pertinent questions such as how the protagonist’s name is spelled, before complimenting the work sincerely. Jessa builds her rapport with the kiddos through her mistakes, never asserting that she knows best, or that she always wants to be there. Her honesty is appealing, her lack of pretense refreshing.

In addition to her genuine enjoyment of the kiddos, Jessa projects confidence and instills a healthy body image, flaunting her voluptuously fit figure. With so much emphasis being placed on being thin, and the premium at times being too thin, I think it’s important that children have positive associations with food and weight. Body confidence and body issues both start young, especially in women. Since Jessa’s charges are two young girls, I think it’s awesome that they have her strong, real, beautiful physique to look up to.

In this blog’s vein of honesty, I also appreciate that Jessa doesn’t leave her nannying gigs and run home to watch Mary Poppins and only engage in nanny-centric activities, but lives a very realistic life filled with mistakes and misadventure. The folks I nanny for understand that, while I am a Supernanny with their kiddos, outside their homes I have a twentysomething life of my own, one that isn’t always suitable for children. This has resulted in one mama’s saying, “Girl we know you’re a Supernanny by day, and a party doll by night!” (Though my escapades pale in comparison to Jessa’s!)And so, my most unexpected honoree in the hall of Supernanny Icon fame, Jessa Johansson, comes and goes: speaking her mind, keeping it real with the kiddos, and strutting her stuff whilst nannying it up!